The reason for the recent quietude? This: 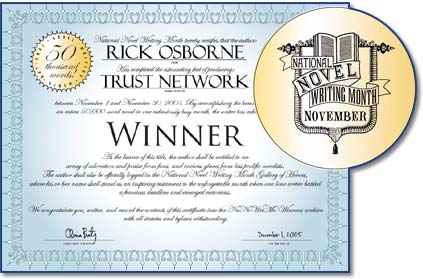 I’ve spent the last 30 days cobbling together 50 thousand words into a short novel. While this does nothing to prove my sanity, it does at least show that when I need to I can actually concentrate on a task for extended periods of time.

I’ve gone through all of the hullabaloo to design a cover and get it put up on lulu.com, and my printed version should arrive in just about a week. Then comes the editing and the rewriting and the sadness when I realize that my own book bores me to tears.

If you are interested, here is the blurb I gave it:

No one thinks they’re a rock star.
Xochitl Green is your typical disaffected geek. She has raw talent, but she has no idea what to do with it. Egged on by a coworker at lunch one day, she’s just written a program that will change how everyone uses the Internet. There’s one problem: she has no idea how big it has become because she’s taken herself off the grid to go on vacation for three weeks.
Someone doesn’t want her to come back.

Yeah, I know, that’s hella melodramatic. At any rate, it’s basically about our current life as geeks and the old standard about how you need to be careful what you wish for. No, it has nothing to do with The Matrix. It does, however, feature social engineering quite prominantly.

I am … unsettled by how the book finished. I think I ended it in a decent enough place, and it certainly wraps up all the threads I had intended to wrap up. But there are several open plot items. I had originally intended the book as the first part of a larger 2- or 3-part novel, and even though I changed my mind and condensed it quite a bit over the course of the month, it ended up almost exactly where I had first planned. It’s funny how that works, eh?

I’m thinking about posting the first chapter to see if there is any kind of interest in reading more of it. If so, I’ll work something out.

Update: The first chapter is available from this web site in PDF format.