cfdiff is my native ColdFusion differencing engine, which works like a very limited version of the Unix diff tool. I promised in my last post about cfdiff that I would rework the differencing algorithm a bit, so that it wasn’t geologically slow, and then release the code. Well, I’m not quite done tweaking the algorithm, but I’ve optimized it quite a bit and have decided to give the world a crack at it:

Yep, that’s right, without touching the core algorithm (which is still more naive than a Republican environmentalist) I was able to realize a speed-up of roughly two orders of magnitude. Not too shabby, I think!

I’ve created a cfdiff project on Google Code, which comes with the obligatory SVN reposity, bug tracker, &c. Anyone who wants to hack away at the disgustingly inefficient algorithm is welcome to. If you think you can contribute significantly to the project, let me know and I’ll give you SVN check-in access. I’m not greedy. 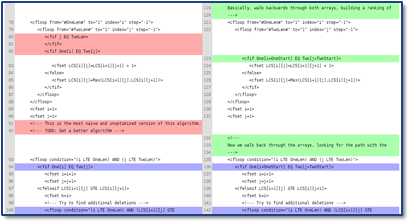 The code has been released under the Mozilla Public License version 1.1, so do read the license before you use or modify the code.