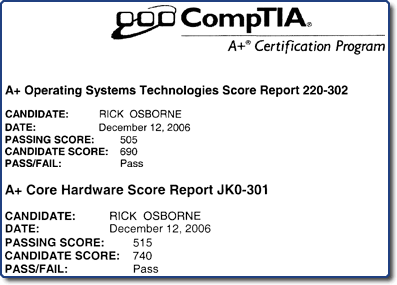 I took and passed my CompTIA A+ Certification Exams today. Which, in theory, means I am now A+ certified … or at least I will be in a few weeks when the actual certificate arrives in the mail. Fortunately or unfortunately, the Community College where I took the exams is not yet set up for the new 2006 version of the A+ (“Essentials” + “Technician”) so I took the 2003 version (Hardware + Operating Systems). The hardware test was just about what I expected it to be — which connector goes where, how to resolve IRQ/DMA conflicts — but the OS exam?

I lamented in my last blog entry that the CCNA is annoyingly tied to Cisco hardware. I didn’t state it outright, but the underlying problem is not the Cisco-centric tests, but that the community uses CCNA as a measure of networking proficiency, while networking theory isn’t even the majority of the test. The A+ OS exam takes this to a whole new level — a large number of questions are of the form “what is the sequence of buttons to click in this specific version of Windows to do this specific task?”. There were very few questions that just asked if you knew what the program/snap-in/window name was that you were trying to get to.

Is it just me, or does it seem profoundly useless to know the series of clicks to get from Point A to Point B for a specific operating system?

To answer my own question, I can see one scenario: blind tech support. You’re on vacation, roped in on a 5.12 overhang in Joshua Tree, when work calls and you need to walk the mail room clerk through how to troubleshoot the company firewall. Admittedly, my example is absurd, but so is the expectation of blind tech support. First, tech support people follow scripts for a reason. Second, the level of knowledge required to pass the other parts of the A+ exam is far beyond a tech-support-monkey level.

There’s one specific question that I will remember for a long time that I would kill to be able to repost, because it didn’t even make an ounce of sense and required you to just randomly pick an answer. However, the first rule about A+ is that you don’t talk about A+. They can yank your certification if you reproduce any of the questions. And I figured I ought to at least have the certificate in-hand before I do anything that dumb.

Whereas I said that getting prepped for the CCNA and taking the courses would help just about anyone … I can’t honestly say the same thing about the A+ exams. I’d hire someone who was A+ certified for just about any sort of tech support position, but I don’t think it would sway my opinion for any other job. It’s a good measure that the certified person has the ability to retain esoteric trivia that will be obsolete before they take the test, but not much else.

I guess I’m spoiled. I loved the ColdFusion certification exam. I walked away from that exam with an elated and exhausted feeling. I knew that I knew my stuff. There were a few questions that I thought were beyond esoteric, mostly having to do with attributes of the various cfform control tags, but I could see why they were asked. I haven’t retaken the CF exam since I originally got certified back in ’97-’98, so it might completely suck now for all I know. But still — to me, that was the gold standard of certification exams.