I ended up giving myself an extra two days to heal, as my legs were still a bit unhappy with me on Wednesday. Going from essentially no mileage to 4 runs and 15 mi in one week was dumb in a typically Aries fashion. Tonight’s run was good, with a goal of 4 mi without dropping down to a walk. I had also promised my wife that I wouldn’t do anything stupid, which included going above 5.5 mph.

From this, I hope you can infer that the entire last mile was an inner battle: her voice in my head reminding me that I had promised, and my voice whining about exactly how bored I was at 5.5 mph. As always, though, she was right: It was a good speed for accomplishing my goal. I have the pleasantly warm “you just ran for an hour” blood-flow feeling in my legs, and while I know that will ache a bit tomorrow, I didn’t hurt anything. I think I could have pushed my way to about 5 more minutes, but I probably would have regretted it. 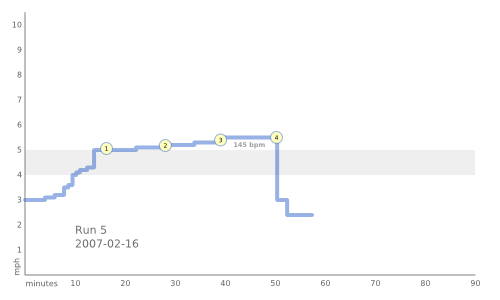 Between the last three runs, I now believe I have set my baseline. From here on out, I will have a solid grasp on how I am progressing.

Another confirmation: listening to schoolwork while running profoundly saps my energy. I was already out of steam by mile 2.5, as the first 35 minutes of my run were taken up with an Intro to IT lecture. It’s mildly interesting stuff, but I need to stop running to it. The last 15 minutes of the run were courtesy of DJ Steveboy’s PodRunner mixes, specifically the 143 bpm Regenerator mix. Good stuff. The effect on my energy level and concentration was immediate, and I dare say that I probably wouldn’t have been able to finish if I hadn’t trimmed down the lecture from its original 67 minutes. From here on out, I’ll save the lectures for the elliptical.

Speaking of going forward, I think a good plan will be to run twice each week. I’ll get my long run in during the week, then the short run on the weekend with my wife. If I can keep pushing out my goals by 10% per week, I stand at least a small chance of keeping up with her when she starts to do the serious runs for her marathon training.

Dear 8 pound, 6 ounce baby jesus, new born, not even spoken a word yet. I think I must be losing my mind.