This was intended to be a short 5K run to test the calibration of my wife’s Nike+iPod chip. Unfortunately, I didn’t know that you can actually calibrate it until after the run was already done. As it was, the Nike+ chip told me I had hit 5 km (3.1 mi) when the treadmill told me I was only at 4.65 km (2.9 mi). Hence the large drop in speed before I actually hit the 3 mi mark. 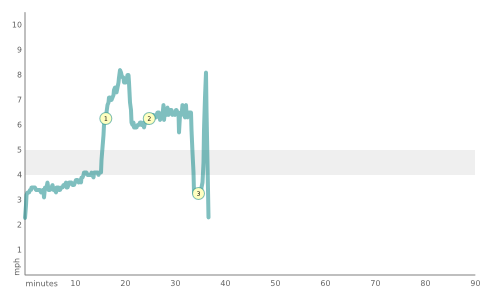 I don’t know what to think about the Nike+ chip. On the one hand, I think it’s great that it will do automagic data collection, and in a nice, pretty XML format that I can drop into Excel and transform into SVG graphs. But I also know that it is a false sense of accuracy and precision. I was at a treadmill, running very constant speeds for much of tonight’s run. The graph above is very smoothed out — the actual data is much more erratic. But, being on a treadmill, I know that my speed should be constant and only change in definite intervals.

It’d be nice if someone would do some studies and see how accurate the chips are. My rough estimates put it at within plus or minus 9%, based on just the one 5K run with about 220 data points. That doesn’t sound too bad until you realize that if you used the thing for training for a marathon there would be a very real possibility that you’d be under- or over-training by 2.4 miles.

I am definitely feeling the runs in my muscles for longer after each run. They don’t hurt, but I do understand that I’m causing microtears and all that rot and that I should take it easier than I am. I think I’ll give my legs a rest and not run again until Wednesday.

I need to slow down. I think I’d be very impressed with how far I could run at 5.5 mph, if I could just stay at that speed and not hot dog up to 6 or 8 mph. Stupid Aries.