Before I get into the details of tonights run, a quick Public Service Announcement for those of you who are subscribed to my RSS/Atom feed and are in no way interested in all these fitness posts. omg stfu bbq.

WordPress, the blog software I use, does allow you to subscribe to RSS feeds for the individual categories/tags that I use. That is, if you are here for just the ColdFusion posts, then you can get just those. Indeed, I have MXNA setup to only fetch the CF posts, to keep the MXNA spam low. Just add cat=3 or whatever to the feed URL.

Tonight’s run could have gone better, but it could also have gone much worse. I managed to snag a treadmill with a TV attached, but they come with a 30-minute limit as there aren’t many of them available at my gym. I decided to see if I could do a 5K at 6 mph, which should have put me at just about 36 minutes on the machine. Close enough in theory, but no joy in reality.

The treadmills with the TVs don’t have the smooth track of a regular treadmill, but instead a reticulated track, like the treads of a tank. Also, instead of a smooth rubber surface, they have a much rougher and grippier rubber. Long story short, once I hit a jogging pace I managed to trip 3 times in 15 minutes. I caught myself each time, but not only did I feel like a damned idiot, but I figured I was risking an injury to continue. Major bummer.

I took a 5-minute break to unwind and try a Chocolate Hammer Gel. I don’t pretend that I am anywhere near the level to need sports gels, but … The wife talked me into trying a Gu a few weeks ago and it gave me an instant headache. Instant, as in before I had even swallowed it. Yes, I really am that sensitive to sugar. The owner of the local bike shop said that the Hammer Gels were more time-release and had very little sugar, so I figured “why not?”. He was right, and I was able to do intervals for the next 35 minutes, so I can’t complain. Best of all, no headache. 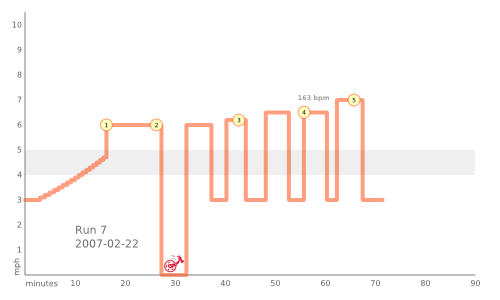 Thumping along at 7 mph is fun for half-mile bursts, but I’m not at the point were I can sustain it for any serious length of time. Yes, yes, I know, I need to learn to slow down. The Biggest Loser Australia from a few days ago had 300 lb. guys doing 5 mph for 2 hours solid. I am more than a little shamed by that.