Last night’s run was a good one. By the end of the 6 miles, I felt like I had worked out not too little and not too much. And today I am not nearly as sore as I’d thought I’d be. But, again, I need to slow down. This run wasn’t nearly as bad as the last one, but I still averaged just about 6 mph, when I really only want to be doing 5 mph.

I found out the hard way that the water fountain at the 3 mi mark is actually sulfur water. Ick. The Hammer Gel washed away the taste, but then I was left with the foamy chocolate mouth for the second half of the run. Lame.

It looks like the wife won’t be able to run for a while, so I’ve got the iPod+Nano for the time being. It certainly is less cumbersome than a giant frickin’ CD Walkman flopping around on my arm. I still need to calibrate it for me, but it looked to be pretty close last night. 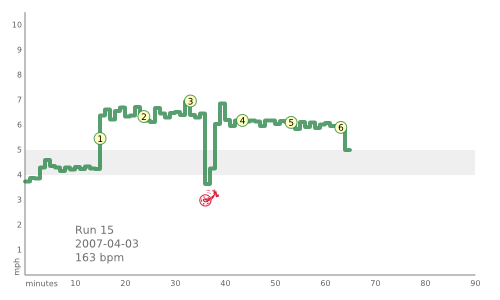