Which do you trust when the treadmill says you ran 7.6 mi and the Nike+iPod says you ran 8.1 mi? If I’m honest with myself, I have to say that it didn’t feel like an 8 mi run. So, I have to go with the former. I do wonder what threw the chip so far out of whack, though. Maybe I should calibrate it before each run? That could at least move the warm-up time out of the “official” run time. The rumor mill loves to assert that the chip is less accurate on a treadmill, but no one goes into detail as to why that would be.

I did my usual slow warm-up with the grade cranked up to stretch out my calves, then turned it down to just a 1% grade for the rest of the run. I had promised my wife that I wouldn’t go over 5.5 mph, so I took it slow and worked my way from 5 mph at the first mile to 5.5 mph at the fifth mile. The rest of the run stayed at 5.5 mph. I watched Enterprise and The Dresden Files and the time just slipped on past.

I started my cool-down at about the 85 minute mark, or just about 7.25 mi. The gym was about to close, which was good because while I had the energy to continue my knees would have regretted it if I had. They’re still a little twitchy now, some two and a half hours later. I need to think about that. I stopped running years ago because of problems with my knees, and that’s not an injury I want to excite. 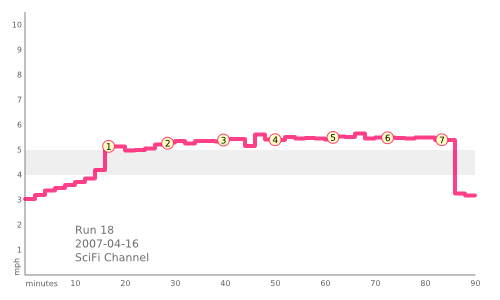 This is easily the longest run I’ve done to date. I think it may also be my first 10K? After the run I downed at least a gallon and a half of fluid over the next 30 minutes. That’s gotta be a record for me, too.