The intent of this post is to explain how to make conditional paths work in MS SQL Server 2000 DTS packages. You can Google for other reasources intended to help you do the same thing, but getting them to work the way I wanted took quite a bit of finagling. I wanted to be able to refer back to this the next time I have to do it.

We’re going to use a simplified DTS package that looks like this: 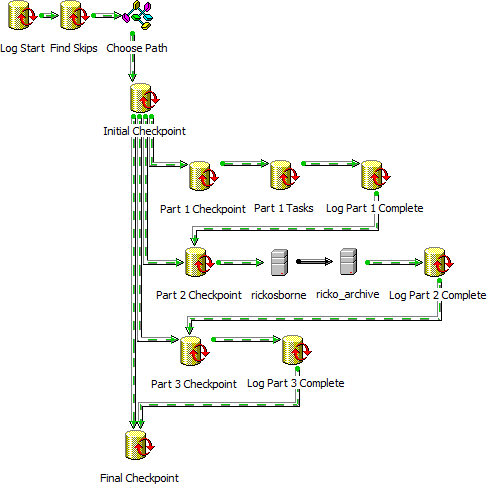 As you can see, there are 3 parts of execution in this package. Let’s presume that each part takes a while to run, one after another, but might bomb out. We’d like to be able to restart the package and have it skip any of the parts that completed successfully. This will save us time on the second run, and may also be necessary to prevent duplicate data. Essentially, we’re creating a sort of resumable package.

Don’t confuse what I’m calling “parts” with “paths”. A “path” implies a logical OR and a possibility of parallelism. While you can certainly use this technique to create dead-end paths and parallelism, this example assumes a mostly-linear sequence where we happen to just skip over a few steps when we need to.

If you’re a coder, all of this should basically look like a set of GOTO statements with each part as a block of code.

There’s nothing magical about the number of parts — you could have two or three or twenty different parts. Each part of execution needs at least two steps. If you can’t think of a second step, make it run a CHECKPOINT or a SELECT 1 or something. You’ll see why later.

The step dependencies (“constraints” in DTS terms, despite reusing a SQL word) look a little hairy, but aren’t too bad. Each part should lead to the next as usual. There should also be an extra set of paths that lead from the step that we’re going to call the “springboard”. There’s nothing magical about this step, and it can be any of the task types, but I highly recommend that you make it a sort of no-op task. Again, a CHECKPOINT or something similar is useful here.

You will also need a “landing” step. This will act something like an ELSE step. In this case it is the last step in the package, but it doesn’t have to be. You could have other things that happen after the landing step. Indeed, you could then go off and do some more conditional logic if you wanted.

You need to do one more thing before you can get all of this to work. By default, when DTS creates your tasks, it doesn’t really name them what you think it names them. The task that you’ve so nicely labeled as “Initial Checkpoint” is probably actually named something like “DTSTask_DTSExecuteSQLTask_5”. So when you run the script task, you’re going to get all kinds of crazy errors about steps that it can’t find. You need to edit all of those names. This process goes much faster and is less buggy if you remove all precedence constraints, leaving only tasks. You can add them back in later.

Of course, you could actually just put the nasty names in your script. But how maintainable and readable is that? The other nice thing about renaming all of your tasks is that they now have nice names in the DTS logfiles, and debugging becomes much less horrific.

For each part, we want to log when it finishes. We can then use this log to tell if we need to do each part again. In a nutshell:

On the presumption that we’re going to keep trying to run this package until it goes all the way through to the end, we’re going to need to keep track of where we are. If this is our first run through for the day, or hour, or week, or whatever timeframe you run your package on, then we’ll need to create a “LogID” — an identifier that all of the other Log steps can use to log their progress. If this is our second attempt or more, we’ll need to recognize that and fetch the latest one instead of creating a new one. Something like this might work for you if you run your package daily:

You’ll need to use the Parameters setting in the task Properties. Go into Output Parameters and set the Parameter Type to Row Value. Use Create Global Variable to make a new package variable called LogID. Set the Type to Integer and the value to 1 for now. This step fetches the ID, and later steps will use that ID to log against.

This one gets a list of the steps that have completed and puts them into package variables. The SQL for this is even simpler:

Again, you’ll need to go into the task Parameters. This time you need to set the Input Parameter to use the LogID parameter you set up in the last step. Then go into Output Parameters and do the same thing as last time: create a package variable for each of the parts you need to check for. Alternatively, you could use a single column that holds the last completed step, then just have the one global variable. It’s really up to you. I use columns for each step, as I’m not storing integers but times, so that I can do reporting on how long it took each time. Really, it’s all up to you.

These tasks don’t do much other than serve as placeholders for the entire series of steps for that part. DO NOT, and I am not kidding about this, use the source of a Transform Task as the first step in a part. See how I do a transform in the step after? That’s fine. Just don’t try to take out that checkpoint and use the transform source as the first step. Seriously.

I’m sure you can guess what to do here:

You’ll again have to set up Input Parameters, but that should be cake for you by now. Also note that you can have as many steps in the middle of the parts. You can do parallelism, or more conditional logic, or whatever you want to do — as long as you have that first and last step, and as long as each of those first and last steps only has single constraints between each other and the springboard step.

See now why we need the landing step? It ensures that the last part is marked like it completed, whether or not that part actually ran. We can also use it to log the fact that everything has completed. And again, it doesn’t have to be the last step in the package — it’s just the step after all of the conditional logic is complete.

Conditional logic in DTS packages is doable. Once you get used to the semi-twisted methodology, it’s not even all that bad. Remembering how to do it, however, that’s the problem. All hail the Internet.