I dread the cute little “Upgrade Your Apple Software” window. Whenever it pops up, I cringe. Then I evaluate whether or not it’s really worth the pain of upgrading. Don’t get me wrong — I like that Apple is doing its best to keep me from getting haxxx0red by script kiddies … when they aren’t busticating iTunes. No, it’s this little window right here that is my kryptonite:

Whenever Apple does its little upgrade thing, the next time I click on any of the shortcuts in my Quickbar, that’s the message I get: “This action is only valid for products that are installed”. But wait, didn’t I just install the product? 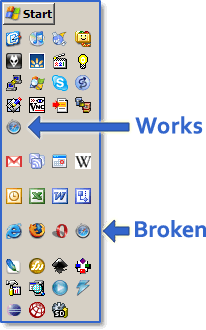 The image on the right is what happens when I do an upgrade — I get two shortcuts to the upgraded app. The top one in the image was generated by the upgrade process. (Did it ask me if I wanted a shortcut added to my Quickbar? No, of course not.) The bottom one was there from the original install, then replaced after each upgrade process. It’s the bottom one that doesn’t work, while the top one does, even though the bottom one had worked just fine until I upgraded. Every. Frickin’. Time.

Am I the only person on the planet that has multiple Quickbars? I’ve got them organized by app type, so that all of my browsers are in one place, my office tools are in another, web apps in another, and so on. Doing that with a single vertical Quickbar is a nightmare, as the icons rearrange randomly and often.

The problem is that Apple shortcuts aren’t shortcuts. No, really. Look: 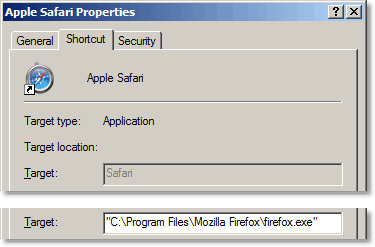 I’m sure Apple thinks it has a really good reason for creating shortcuts like this … but I don’t have the slightest care what that reason is. It’s annoying. It’s counter-intuitive. And, if I may go all righteous, it’s very un-Apple-like.