As some of you know, I’m in the process of trying to sell a book I wrote. For those of you who don’t know, no it has nothing to do with ColdFusion or data visualization. It’s a fiction novel I finished last year. (In that same hazy way that code with a major version number is finished.) It’s called Trust Network, and here’s the synopsis: 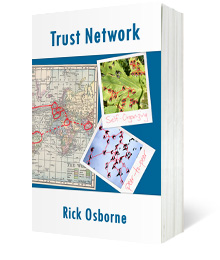 The Internet is a cocktail party. At least that’s how Xochitl Green sees it, even though she’s never been invited to one. In the abstract, how different are they? Friends chat, interaction implies trust, and everyone is connected. Want to meet someone new? Grab a wingman or two, get introduced, and see where things go.

Her idea is simple: take that interaction, that trust, and use it to keep everyone safe online. Make it simple and bulletproof, so that even computer-fearing grandmothers can use it. It’s just a few weeks of coding, and it’ll give her something to do with all the free time from not being invited to cocktail parties. Why not? Get it done, go on vacation, and chill out.

But online cliques and bouncers make things a little too difficult for Internet party crashers. They’ve got big plans, and want to return Xochitl’s hospitality—putting her on the run. But when all you know about the world is how it looks on your screen, what do you do? Where do you go? Who do you trust?

I got tired of all of the misuse and abuse of technology in the fiction I was reading, the eye-rolling that it always caused, and snarked that someone needed to do a better job. A few too many put up or shut up comments from family and friends later, and here we are. It’s fiction meant to be read by smart and savvy geeks. I wanted the technology part to be bulletproof, but without taking over the story or becoming madness-inducingly boring. There’s maybe 20 pages of technobabble story-building, and the rest is pure world-hopping thriller.

You know what I found out? Writing fiction isn’t all that different from writing code. There’s an initial hacked version, and you feel horrible about how bad it is but glad that it gets the job done. Then you spend another 50% of your time going back and revising and improving that first version, trying to make it suck less. You’re never really done—there’s always some lovehandle that could use a little work.

So there you go. It’s no longer even a non-secret. Hurrah.

Point being, as I said I’m in the process of shopping it around for publication. That may never happen, but there is the possibility. Until then, it seemed to me that since it is all about social networks and building trust between people, I figured it would be hypocritical to just throw it in a drawer and hide it. I’ve made it available for free in several formats, which will stay up until someone throws money at me and makes me take them down for my own good.

Lulu is a print-on-demand service, if you absolutely must have a paper version. I’ve made a few different formats, ranging in price from $10 to $17, before shipping. That price does not include any commission for me, it’s entirely the cost of publishing. You can also download the full, no-DRM, print-friendly versions of the source PDFs from that same page.

Scribd has a thousands of books, papers, and other works that you can read online. Their Flash-based viewer is smart enough to remember where you were, and is good if you don’t want to go the PDF route.

Authonomy is useful if you want to make comments on specific chapters—such as for bugs errata. Beyond that, it’s probably not useful to you unless you have an Authonomy profile or want to read it in ugly HTML format.

If you know what these are, then have at them. Oh, and let me know if they are formatted alright.

That blog category I mentioned a week ago that’s going to start seeing more action? Writing. I’ve found that I really enjoy writing, and that it’s become just as much a part of my life as coding and developing. I have another project in the works that I’ll talk more about in the next week. Until then, here’s the pretty Scribd viewer: