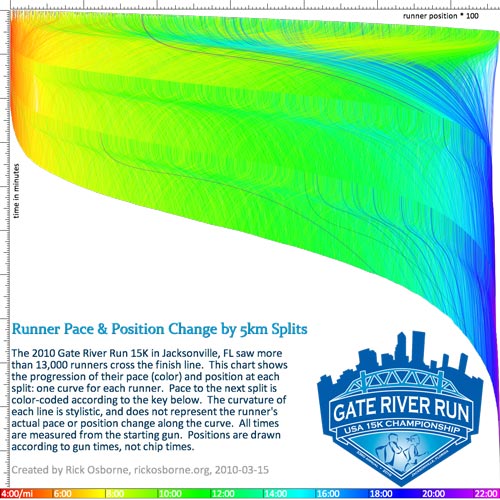 I did okay—about the same as last year. I had wanted to cut my time by about ten minutes, and had done so in the gym, but I got sick in the week leading up to the race and hadn’t recovered in time. But, it was still fun!

The graphic above shows how the race was run: each strand is a runner. The race starts at the top left, and progresses down through time, and to the right as each runner crossed the Start and Finish lines. The 5km split times were recorded—those two seams in the middle—allowing me to chart how each runner progressed through each. Pace to the next split is used to color each strand.

Had I charted my own line with some kind of emphasis, you’d see me start ~1300 runners in from the right, and progress to almost the half-way point at about 7000 runners back from the winner.

What does this chart say? It says that too many people at the River Run start in a position that is in no way representative of their actual finishing time. See all those green and cyan strands that start to the left of half-way? If they were considerate, they’d start farther back, letting the yellow and orange runners to the right start earlier. The dark blue and purple strands are walkers and are admonished to start at the end of the queue—which a majority of them obviously ignore.

It also shows that a number of the seeded runners—the first several thousand, expected to maintain an ~8:00/mile pace or better—burn twice as bright for half as long, crashing hard and dropping significantly in position by the 10km split.

I still need to do a bit more data mining. My goal is to figure out where I need to be in the starting line to minimize the number of people I have to wade through, while at the same time not surrounding myself with runners going twice my speed. I have an aggressive goal for next year (shaving almost 20 minutes off my time), but it’s attainable.

P.S. – This chart was generated from the official result data, massaged a bit to clean it up, and then run through ColdFusion for image processing. Go ColdFusion!