This was my first attempt at an early-morning run. By early-morning, I mean 7am before my class. Ugh. I felt like I was dragging ass the entire time. It was supposed to be 5 mi, but I ran a little late and only had time for 5 km, instead.

I need to figure out the food situation if I’m going to make the morning runs work. I’d had a Marathon bar, but that’s not going to cut it — it takes too much energy and water to digest. But at the same time, I don’t want to be using caffeine or gel for such an early and short run. Similarly, I don’t want to be getting up at 4:30am to eat something so that it’ll be digested by the time I get to the gym at 6:15am. That’s just silly.

And the chip is still off — it claims I did 3.6 mi this morning. 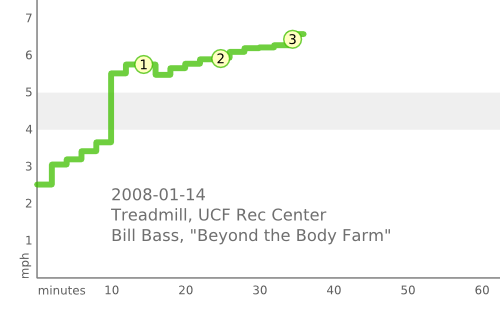 In other news, I sat down with an Academic Advisor this morning to try and figure out when I can graduate. I have 8 more classes, but it’s going to take until end of Spring 2009 due to classes being offered at only specific times during the school year. Gah.