I’m still exploring the world of treemaps. The squarified treemaps that I used to make a map Ben Nadel’s commenters and a map of my recent musical taste are all fine and good for flat data. It turns out that they really aren’t all that great for hierarchical data—since the squarification process requires the boxes to be order of descending area, that doesn’t work so well on shallow-structured datasets.

And what kind of data do you think I’m working on visualizing? Hierarchical and shallow, of course.

My next stop was to dive into Voronoi treemaps. The definitive paper on the subject is a gory, math-filled evisceration (PDF) of the topic. It’s not an easy read. The good news is that Voronoi treemaps provide pretty and intuitive visualization of hierarchical data, whether deep or shallow, balanced or extreme. 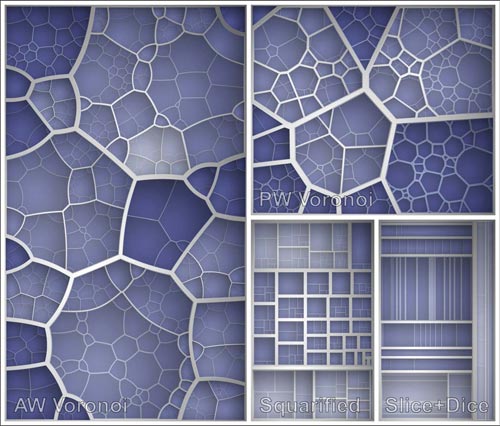 The bad news is that generating weighted Voronoi tilings is NP-hard—meaning that there’s no one perfect algorithm to always get the right answer quickly. Now, ColdFusion is great, but you generally don’t want to throw something NP-hard at it. It can do it, but maybe it’s not the best solution.

I wrote a little CF code to see how hairy it looked like it would get. Briefly:

Yeah. That in no way sounds like something I want to tackle in ColdFusion.

When I moved on, I found this 2008 MIT paper on Circular Paritions. While maybe not as organic and pretty as Voronoi treemaps, this scheme is almost as nice:

Of course, that paper is just as hard to read as the Voronoi paper. I’m no slouch in math, but I have to admit defeat when it comes to most graduate-level theory. I’ve re-read it, bit by bit, probably a dozen times now. I think I’ve got it mostly in my head, but I keep having to read it, walk away, and let my subconscious chew on it for a few hours.

Not nearly as bad as that close enough try-and-repeat crap from the Voronoi algorithm, right?

But, really, I kind of lied. If I’m reading the paper correctly, you can’t just use the bisector of the smallest angle. That part about the most oblong orientation is more important for some cuts, but the bisector is more important for others. And how do you figure out what the optimum rotation is? Do you have to do it iteratively, or is there some kind of shortcut formula? That’s the part that I’m still having trouble interpreting from the paper.

But I’ll get there. And damn, will it be cool to code up in ColdFusion.